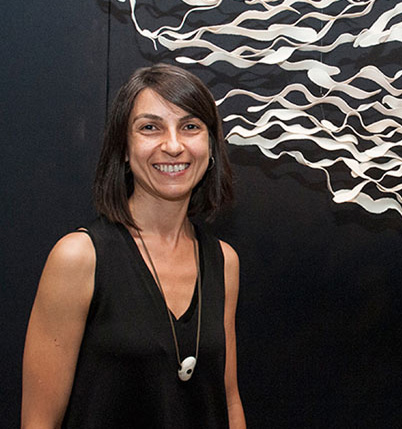 Barcelona, 1972. She starts her relationship with artistic disciplines in 1992 by the way of image, through video and specially photography. Nevertheless, her professional activity develops out of the artistic field and it’s not until 2007 that she begins to discover ceramics.

Three years later, moved by the infinite possibilities that this field offers, she decides to start her artistic ceramic studies at LLotja school, in Barcelona, finished in 2013. Also, in the last years, she has taken some other courses about ceramics and sculpture taught by recognized artists linked to ceramics, as Miguel Molet and Ángel Garraza.

She has also participated in various collective exhibitions in the Spanish territory.

Since 2015 to 2020 he is part of the commission that manages the exhibition hall of the Associació Ceramistes de Catalunya and in 2017 to 2020 he becomes part of the board of directors.

In 2020 one of his works “Ressons de baixamar” becomes part of the ceramic collection of the Barcelona Design Museum.

As main activity she develops her creative work through the ceramic technique, with a great interest in volume and shape in her studio in Barcelona, Ànimans_espai ceràmic, opened in April 2019, Where also teaches pottery.

© 2022 Ruth Cepedano. LEGAL. Web design: edusole.com.
We use cookies to ensure that we give the best user experience on our website. If you continue to use this site we will assume that you agree.OKPrivacy Policy